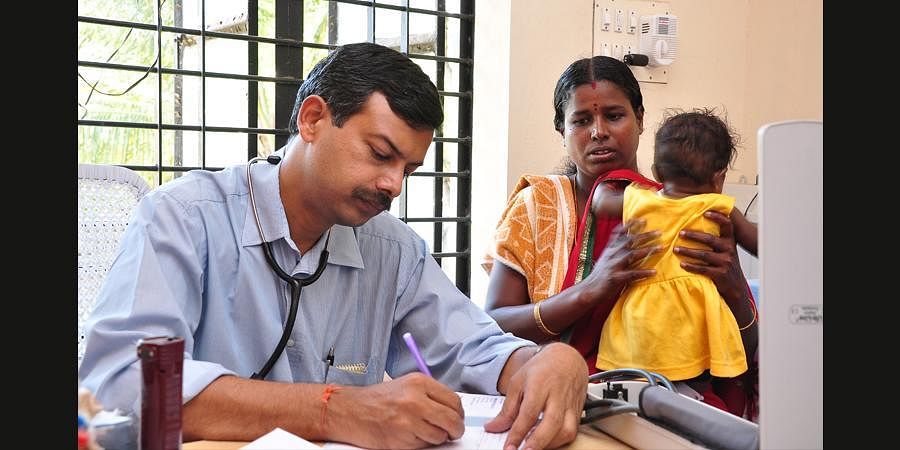 People wait anxiously in a run-down hospital in Agali, in the tribal hamlet of Attappadi, to meet Dr V Narayanan. The 47-year-old, a paediatrician by training, also serves as the community’s physician. And it is up to the patients to decide on the charge. He began servicing the tribal settlement’s residents in 2002 and has since earned the nickname “10-rupee doctor.”

The Swami Vivekananda Medical Mission (SVMM) hospital, which was established under his initiative, is known as the “ten-rupee hospital.”

“Dr. Narayanan is someone I’ve known for 15 years. My husband is in pain all over his body. As a result, I’ve brought him here. Only ten rupees is collected as a token fee, and medicines are frequently given away for free,” said Sindhu, of Vayallur, who was present at the hospital.

Over the years, the Mission and the tribal people have developed a bond. Occasionally, people from the interior arrive and ask me to advise some members of their family to take tuberculosis tablets. The tribal elders refuse to take them because they are large tablets. However, when they are admitted to the hospital here, they take the medications on a regular basis, and as a result, we have been able to prevent the disease from spreading,” he says.

In August 2002, he began conducting medical camps in Attappadi, a Kollam native.

When he arrived, there were no paediatricians in the area, a situation that had only recently changed. Dr. Narayanan recalls performing the first Caesarean section on a tribal woman at the Kottathara Tribal Speciality Hospital.

He and his team have established a community network in all tribal settlements, as well as volunteers who identify and transport mental health patients for treatment.

“At least 500 people are being treated for alcoholic de-addiction,” says Lakshmanan, a Kandiyoor volunteer. During the last two months, the SVMM hospital also built a 50-bed Covid care centre.

His wife, Dr N Lalitha, works as an associate professor at the PSGIMSR Foetal Care Centre in Coimbatore. Shriram, 14, and Maheswaran, 10, are their two children.

First Step towards healing is acceptance

10 Reasons To Be Happy (Even When Life Sucks Right Now)

First Step towards healing is acceptance

We are on a movement, we are changing the news for good. One day at a time, right in your inbox.